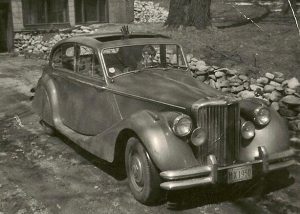 Judges Guides are an important part of JCNA’s program to improve the quality and standardization of JCNA Concours judging and the Judges’ knowledge of various Jaguar models. Judges Guides are intended to augment official Jaguar publications by supplying well-researched information not readily available or conveniently presented elsewhere.

Following AGM approval, a Judges Guide becomes an official JCNA document. The Judges Guides, and other official Jaguar Cars publications, (see Rule Book Appendix C) may be used by Entrants and Judges alike to validate or challenge the authenticity or appropriateness of items, features, materials, patterns, colors, configurations or accessories found on the Jaguar automobiles covered. All Judges Guides are subject to editing and/or correction as additional verified information is acquired.

30 September, 1948 William Lyons makes a speech at a factory meeting introducing the Mark V saloon to a presentation meeting of sales distributors and dealers, at  which time he said the name was chosen because it was the fifth prototype body made by his panel beaters to fit the new chassis, and was referred to as such in internal company documents. (reference Clausager)

The DHC was not introduced until the middle of 1949.

The name ‘MK V’ is chosen because the design that William Lyons is happiest with is the 5th prototype of the independent front suspension developed by Jaguar. It may also be due to the rivalry between Jaguar and Bentley’s MK VI.

To the best of our knowledge, these are the final chassis numbers in each series, making a total production of 10,502 cars. Some published sources have slightly fewer totals, possibly because they are reporting wholesale or retail sales figures, which may not include factory service and test cars.

The chassis number on earlier cars is stamped on the chassis frame side member at the left front jack socket, while for later cars it is stamped on the mounting bracket provided for a left hand brake master cylinder, regardless of whether the car is LHD or RHD. Some cars including mine have it in both places. 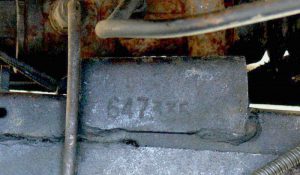 Where a feature can be documented by a good reference source, it is noted in the text with initials such as (SM) for Service Manual or (PC) for Parts Catalogue, and Plate numbers given are from the Service Manual.

This Judges’ Guide is not designed as a restoration guide, but as a guide for the JCNA Judge to become better acquainted with the correct appearance for the MK V Saloon and Drop Head Coupe models.

This JCNA MK V Saloon and Drop Head Coupe Judges Guide has been developed following the layout of the JCNA score sheets. The score sheets are generic and designed to cover all models, thus some headings are not applicable to each model, however, each heading is addressed and noted where it is not applicable.

Each section’s Section headings, like Exterior, Interior, etc. are bold and Left Justified at the beginning of each section.

Each major block heading on the score sheet is surrounded by a large rectangle.

Each item addressed in the Score Sheet Block heading is then surrounded by a rectangle, whether or not they are actually an item on the car, such as “Power Steering”. It is on the score sheet, but it is not an item on the particular model being judged.

Items Judges are to look for have a check mark, and are bold and italicized.

A comment about Jaguar’s ‘ghostly’ MK VI. The name is not used by Jaguar works due to the rivalry with Bentley’s MK VI, produced between 1948 and 1952. It is rumored that the Jaguar ‘MK VI’ could have been the MK V with the XK engine replacing the pushrod engine. Two such cars are built, one as a test bed and one for William Lyons. However, such a combination is never intended for production. Lyons selects the name ‘MK VII’, for the model that succeeded the MK V and the MK VII is the first production Saloon fitted with the XK engine.